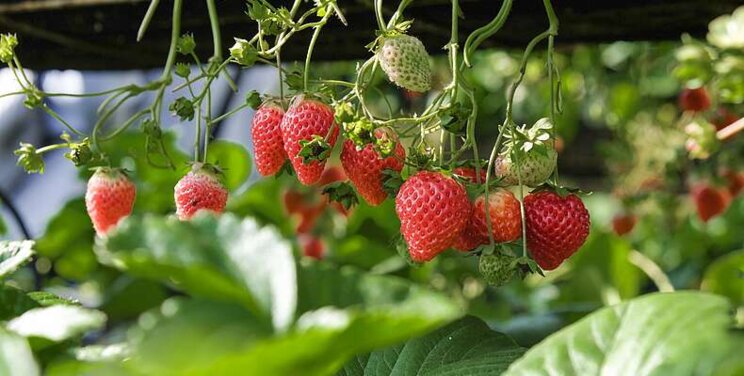 One of the key pests to watch for in greenhouse strawberry production is spider mites, in particular two-spotted spider mites, which can lead to severe bronzing and stippling on leaves that appear to be wrapped in webs.

A recent e-GRO alert from W. Garrett Owen at the University of Kentucky outlined a recent case in which populations of spider mites were observed in a greenhouse. Individual leaf condition varied indirectly with leaf age; younger leaves showed less symptoms than older leaves, which had served more time as feeding/breeding grounds for spider mite (Tetranychus sp.) populations. At the time that these spider mites were observed, populations had already exceeded 15 to 20 mites per leaflet, and overall plant health had drastically declined.

According to Owen, while the namesake webbing is a clear and distinct indicator of spider mite infestation, it is usually too late to effectively control the pest population by the time that these webs have been constructed. Even in populations as small as one mite per leaflet, spider mites can contribute to noticeable yield loss; once populations grow to exceed 15 to 20 mites per leaflet, growers will see substantial yield losses. These yield losses can generally be attributed to the reduced photosynthetic capacity of infested plants, as spider mites remove chlorophyll from plant cells as they feed. Growers facing a spider mite infestation may see yield losses such as stunted plants, deformed flowers, delayed flowering and fruit development, and reduced fruit size and quality.

For more information, including transmission, signs and symptoms to monitor, management strategies, and several images, check out the original e-GRO alert here.