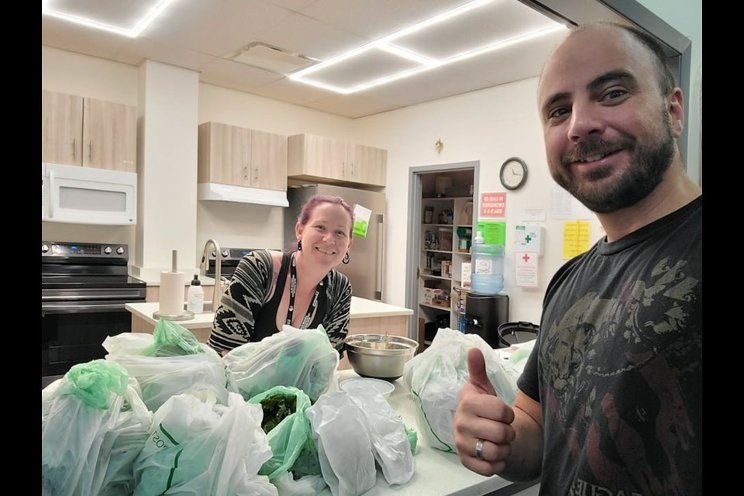 “While it’s painful to see that there’s no funding awarded at the second and third level of the innovation challenge, the reputation that it has afforded us alone is still helpful and it helps us in the long term,” Feagin said. “But yeah, we were really hoping for that first place.”

The first-place prize of $5,000 was awarded to BioNorth Solutions of Thunder Bay, while TECC Agriculture Ltd., a precision agriculture company in New Liskeard, rounded out the top three.

“Being able to feature the innovations that are occurring in Northwestern Ontario provides significant value to changing the discourse around what’s happening up here and what we have to contribute to a multitude of different industries,” Feagin said.

AgriTech North says they are the first wholesale-scale grower of fresh produce in the Northwest. It grows leafy greens and small fruiting crops and has a year-round distribution chain. The facility serves mainly rural and remote areas, which Feagin says are often left behind by urban infrastructure.

“There is no distribution infrastructure that currently exists for the cold and frozen chain, (the infrastructure used to move fresh product around),” he said. “There are trucks that pass by that have cold, frozen or room temperature storage, but the infrastructure is lacking in our communities in the sense that there’s nowhere for those (trucks) to go in order for them to be acquired in our rural communities. And that’s one of the challenges that’s causing our food insecurity in Northwestern Ontario, is lack of infrastructure.”

Feagin says there are significant innovations in his area of work that can easily be applied to these challenges.

“And that’s the market gap we’re filling. We’re a social enterprise beneficial corporation or B-Corp for short,” he said. “We are built upon a foundation of transparency and we have four pillars in our B-corporate registration; food security, sustainability, education, and workplace diversity, equity and inclusion (D&EI). We are 100 per cent D&EI staff, we’re Indigenous, differently labelled and LGBTQ.”

Feagin says the food industry is extremely capital-intensive and as a result, food organizations are pressured to take on substantial equity investment to make their profit possible. He says Ontario’s statistics show that more than 70 per cent of what’s grown in greenhouses across Ontario is exported to the U.S.