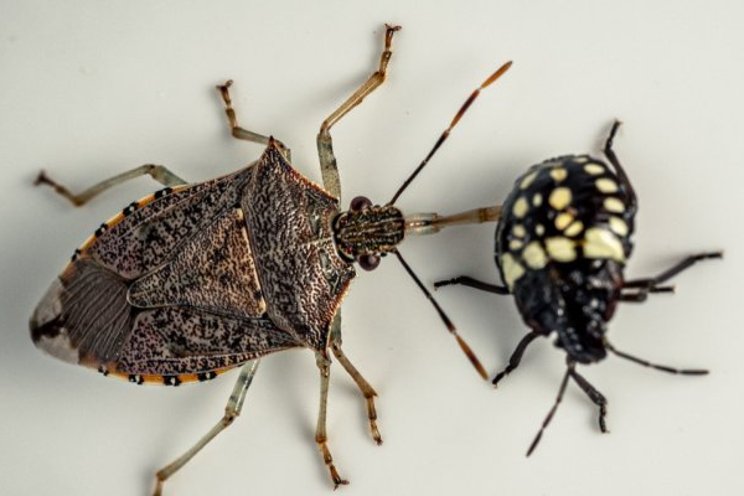 The southern green stink bug, Nezara viridula, has been active in Dutch greenhouses for several years now. The insect causes damage in several protected crops, particularly in sweet peppers. The Business Unit Greenhouse Horticulture and Flower Bulbs of Wageningen University & Research (WUR) is investigating what are the best methods of controlling the new pest biologically. A promising candidate turns out to be an 'old' acquaintance: the predatory stink bug Podisus maculiventris.

The southern green stink bug is 11.5 to 16.5 millimeters in size and has been a pest in southern Europe for a long time, but occurs worldwide. In recent years, the insect is migrating northwards and eventually ended up in Dutch greenhouses. Damage has been reported in the cultivation of sweet peppers, cucumbers, gerbera and aubergines. Pepper growers are particularly affected by the southern green stink bug: the southern green stink bug punctures fruits and young plant parts, causing growth reduction, loss of quality and spots on the fruits. In autumn, the stink bug goes into diapause, hiding in and around the greenhouse.As soon as a new cropping cycle is started, the diapause is broken and the bug reappears.

Three years ago, WUR started to research possibilities to control the bug. During the research, the effects of pheromone traps, entomopathogenic fungi, overwintering traps and natural enemies were tested. In addition to the commercially available egg-parasitic wasp Trissolcus bassalis, the predatory stink bug Podisus muculiventris was also tested. This bug can be a good addition to the parasitic wasps, because a complete control with parasitic wasps proves difficult to achieve.