Energy and LED costs and differences of vertical farms 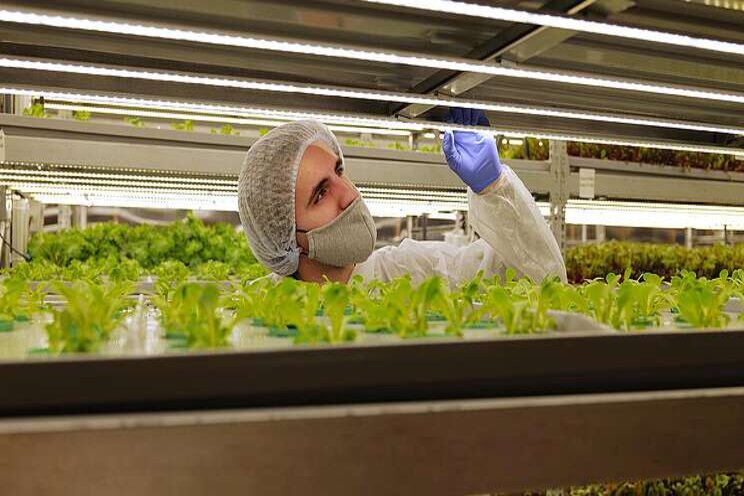 That last part is what you might call "the elephant in the room" when it comes to indoor farming: Energy demand, and the main reason we care about it - carbon emissions. So let's talk about that today.

[Part 2 of 5] This is the second post in a 5-part series on the differences between vertical farms and greenhouses, and the considerations that will help farming entrepreneurs decide which is right for their situation.

Last week, in the first article of this series, we discussed the basic differences between vertical farms and greenhouses, including why location is such an important factor in the decision. In short: The location of a farm governs how much space will be available for it, and the source of the energy it will use.

Carbon Footprint Factors: Electricity (But Not Only)

One of the leading critiques of vertical farming is that replacing natural sunlight and open air with LED bulbs and climate control requires electricity - lots of it.

"If the source of the energy is not renewable," points out Henry Gordon-Smith, the CEO of Agritecture, an independent consultancy that helps clients decide between vertical farms and greenhouses, "Then vertical farms have enormously more carbon footprint than greenhouses."

But the opposite is also true - where renewables are available, vertical farming can greatly reduce the carbon footprint of foods that are normally trucked long distances, or flown in from overseas.

For example, "Norway could be huge for vertical farming, because they just have so much cheap, renewable energy," Gordon-Smith suggested.

When you tally the emissions reductions from shorter transport distances, the reduction in fertiliser use (fertiliser production is highly carbon-intense, and Controlled Environment Agriculture uses it much more efficiently than outdoor farms), plus the reduction in food waste, it's clear that artificial light and conditioned air inside vertical farms are not the only carbon footprint factors to consider.

Lighting is one of the biggest expenses for a vertical farm, for obvious reasons - each layer in the farm needs its own LED "suns." Agritecture Designer, a consulting software created by Gordon-Smith's company, estimates the need at roughly 10 LEDs per square meter.

That's a useful figure to get started, but given the variability between types of LEDs, a more precise estimate would be about 100 watts of LED power per square meter, according to Gus van der Feltz, another CEA industry expert. Van der Feltz is a co-founder and Board Member of Farmtech Society in Belgium, and project leader for Fieldlab Vertical Farming in the Netherlands.

With these lamps operating 12 to 18 hours a day in most vertical farms, the power usage from LEDs accounts for 50 to 65% of the electricity bill.

The exact amount depends on several factors: The relative efficiency of the LEDs used, compared with the efficiency of other systems in the farm (such as climate control), as well as the light requirements of each individual crop. (For example, the total electricity required for growing light-loving strawberries in an iFarm, for example, is about 117 kWh per month for each square meter of growing space, while arugula needs only about 52 kWh.)

But whether you opt for a greenhouse or a vertical farm, you'll be growing local produce, which means your farm may be eligible for subsidies or another form of reduced electricity rate. Be sure to check with your local government and electricity providers.

It's also important to note that greenhouses increasingly rely on LEDs as well, especially during winter in northern climates.

This may be only supplemental light, and it will vary with the location, seasonality, and how much light each crop requires - but greenhouses are still not as energy-intensive as vertical farms.

"It takes a lot of energy to produce food (with vertical farms)," says Ramin Ebrahimnejad, vice-chair of the Association for Vertical Farming, and an expert on multiple types of urban farming.

"But," he adds, "most vertical farms in the developed world already use renewable energy. In the long term, that's not going to be a challenge for the industry".

As our electricity sources become more renewable (and as LED technology improves, as we'll discuss below) energy-intense vertical farming will become both more sustainable - less carbon-intense - and more affordable.

And we can see this evolution happening in real time: In 2020, Europe produced more electricity from renewables than from fossil fuels for the first time.


The Cost of LEDs for Vertical Farms vs Greenhouses

LEDs themselves are another major OpEx factor in vertical farming. And even though the cost per bulb varies widely, along with the efficiency, the LEDs in a vertical farm generally have to be replaced every five to 10 years, according to the Agritecture Designer software.

However, just as the cost and carbon footprint of electricity are becoming less of a hurdle for indoor farms, the LED situation is also evolving quickly.

An idea that's become a modern certainty is that technology gets cheaper over time. As the environmental economist William Nordhaus studied in the 1990s, the declining cost of light over the centuries - from candles, to oil lamps, to ever-more-efficient light bulbs - has been changing the world and fueling innovation for millennia.

Something similar is happening with LEDs - up to a point. Moore's Law famously predicted computing power doubling every year, and Haitz's Law now forecasts that the cost per lumen for LED light will fall by a factor of 10 each decade, while the light produced increases 20-fold.

However, as Van der Feltz points out, this cannot continue forever, and is more limited by the laws of physics than Moore's Law. Currently, a well-designed horticultural LED system can be up to about 55% efficient - meaning 55% of the energy put in becomes photons, which plants use to grow, and 45% becomes heat. Fifty-five percent efficiency is already impressive when compared with incandescent light bulbs, for example, where energy input produces 5% light and 95% heat.

But still, for the purpose of CEA and especially in vertical farms, the remaining 45% of the energy that becomes heat is often - though not always - useless.

"In greenhouses," Van der Feltz explains, "the additional heat is typically not all bad. Especially since auxiliary greenhouse lighting is mostly used in the darker and cooler winter months, and there are usually plenty of options for ventilation in case it gets too warm."

But vertical farms heat up quickly, and as closed systems where opening a window is not an option, any extra heat from LEDs must be balanced with air conditioning or creatively repurposed. Van der Feltz says some indoor farms have been designed to divert excess heat to warm an adjacent building, for example.

So LED performance can still improve marginally, but not exponentially. Van der Feltz says experts estimate that another 25% efficiency improvement is possible, but LEDs will never be able to produce light energy out of thin air.

Whatever the limits of Haitz's Law, it's still true that while electricity and LED light bulbs are the most expensive part of a vertical farm today, they're also the area where improvement is most imminent. (Innovation, and the laws of supply and demand, are constantly bringing down the costs of both, regardless of how much efficiency improvement is still technologically possible.) So operating a vertical farm should still become increasingly affordable over time.

Improved technology and reduced costs for LEDs are especially good news for the potential to grow even more crops in vertical farms, as different plants use different parts of the light spectrum.

iFarm is already a leader in the industry when it comes to research and development for expanding the crop selection available to vertical farmers. As LED technology improves, we'll be able to take those efforts even further.