Biobest is delighted to receive the Bernard Blum Award, for the most innovative biocontrol product, in recognition of Pronemite (Pronematus ubiquitus) – a new category of commercial arthropod biocontrol agent that concurrently targets a key pest, and a problem fungal disease - powdery mildew. 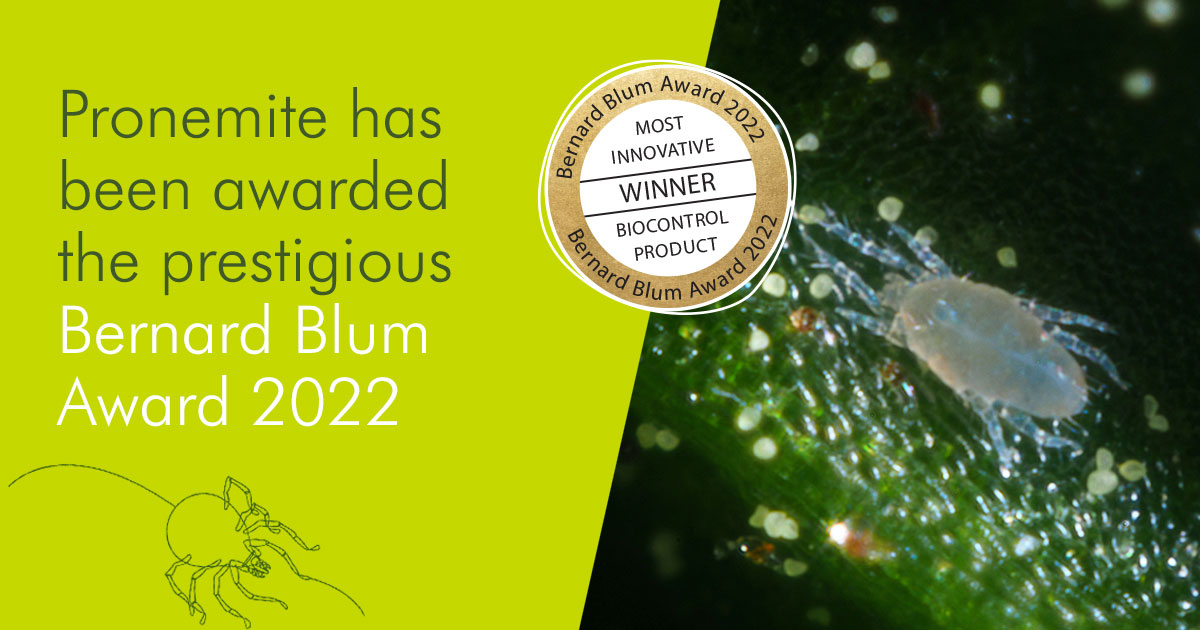 “Pronemite is a genuine breakthrough,” says Felix Wackers, Biobest R&D Director. “Pronemite is representative of a new family of beneficial mites; it’s the first effective biocontrol solution for russet mite control; the first commercialised fungal disease control using a mite; and uniquely the first commercialised biological control organism shown to simultaneously control a key pest and a problem pathogen in a protected crop. As such, it represents a whole new category of biocontrol.”

“Large populations of this arthropod mite can be built up preventatively in a crop using our feed supplement Nutrimite™. We’ve shown that creating a ‘standing army’ of the mites in the crop can be highly effective in preventing the infection and spread of russet mite and/or powdery mildew.”

“Pronemite is set to become a major game-changer in biological crop protection programmes by eliminating the need for repeat insecticide or fungicide applications,” says Felix. “In commercial strawberry crops, powdery mildew can necessitate 10-22 fungicide applications over a four-month cropping cycle.”

“While enhancing sustainable production, Pronemite opens the door to the establishment of other biocontrols agents – whose full potential is currently hampered by the widespread use of pesticides. As such it can be a key stone in a more complete biological control programme, playing an important role helping to minimise/eliminate chemical residues on produce.”

“In a class of its own, we’re already seeing a lot of enthusiasm for Pronemite in the marketplace,” says Hanne Steel, Biobest Product Portfolio Manager for Beneficials. “Growers like its innovative nature and are keen to further reduce reliance on crop protection chemicals.”

“This exciting finding - that arthropods can effectively control diseases - opens many new opportunities for biological crop protection,” she says. “Almost all predatory mites commercialised for crop protection are from the Phytoseiidae family. Pronemite is from a separate superfamily, the Tydeoidea. As this mite has a cosmopolitan distribution, with appropriate production registration Pronemite offers the potential to be used worldwide without concerns for local biodiversity.”

“Already proven to work in crop conditions, we’re at the commercial stage – collaborating with strawberry and tomato growers in Europe to optimise Pronemite performance in a range of crops - before its widespread launch next year.”

“Largely overlooked till now, this group of arthropod mites is set to have a strong impact on biological crop protection and sustainable production in the future.”