Could indoor plant factories be the norm in 10 years? 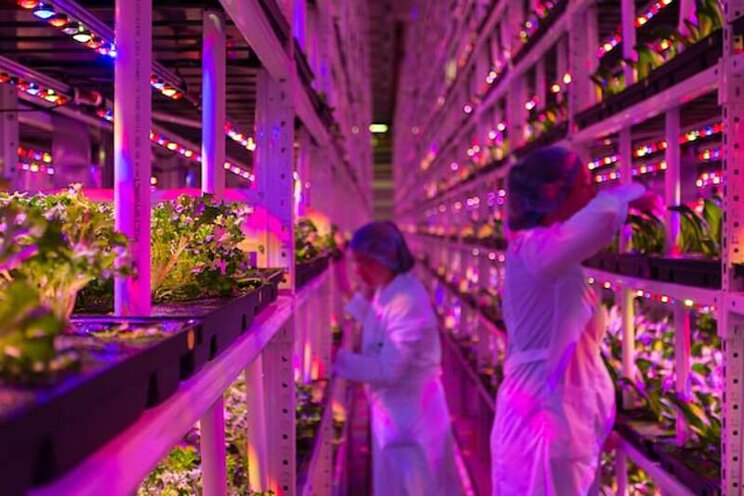 Behind an airtight door, inside a warehouse 10 minutes walk from Bristol city centre, shelves of vibrant chives sprout enthusiastically towards a sky of multicoloured LEDs. The air they are transpiring smells earthy, despite the absence of soil, while a mechanical hum provides a soothing substitute for birdsong.

Welcome to the future of farming, where herbs, salads and soft fruits are grown year-round in vast, indoor plant factories.

Bottom of FIn June, the British vertical farming startup the Jones Food Company (JFCo), announced it was building the world's largest vertical farm on the site of an old forge in Lydney, Gloucestershire.

Its CEO, James Lloyd-Jones, predicts that within 10 years, the U.K. could be growing all its herbs, salad leaves, soft fruits  and potentially cut flowers  this way: "Vertical farms will become the norm within the supply chain, and probably take away greenhouse production and imports."

The seeds of this revolution are being sown  in vertically stacked layers of sheep's wool  at JFCo's innovation centre in Bristol. Lloyd-Jones said: "Vertical farming can grow anything. It just grows lots of things too expensively to be commercially viable, so here is where we are learning how to commercialize it."

In the first of four 69-square-metre grow rooms are stacks of brilliant green chives. Every environmental parameter in the room is tightly controlled, from the temperature, humidity and carbon dioxide content of the room, to the colour spectrum, intensity and pattern of the light-dark cycle, and the nutrients the seedlings are exposed to.

This story was originally published by The Guardian and appears here as part of the Climate Desk collaboration.